How It All Turned Out 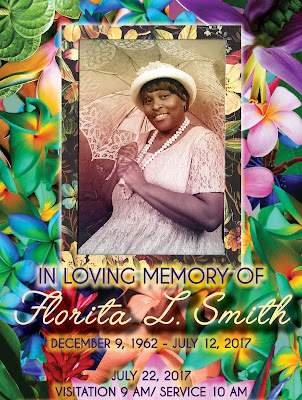 The inevitable day has come and gone.  Tears fallen and dried, but the well still stirs inside.  Thank you to anyone that read my request for help and answered by donating to Florita's goFundme.  Several costs were able to be covered.  We're still in somewhat of a hole but its not as bad as it could be.

Y'all already know I did the program... No one could have done better than I. The people that saw I was stressed told me to give it to the church or funeral home to create.  I said noooooooooooooo way!   It was a minefield to cross though, helping managing the days events, speakers, and the ultimate food offering after (just me and my uncle, mom helped as she could given the situ). I also had to disconnect from Flo to complete my task, as if it were for a client's family member.  Still, there was no way I wasn't going to do her program.

So... to list the creative & technical gist,  I grabbed some tropical flowers from a Google search (thanks interwebs!) selected & isolated them with the tool underneath the magnetic lasso ( escapes me rt now), rotated, screwed... you get it.  There's also the outer glow on the type which is Angelface (script) and Champagne & Limousines- shout out to the creators Mario Arturo & Lauren Thompson.  Long/short, all imaging was done in Photoshop, the layout was done in Illustrator CS5 (my favorite dinosaur :).  Take a look, names and info blurred for privacy. 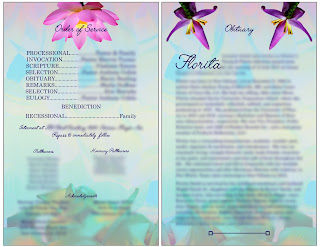 Just in case you didn't know, which I just found out, some people love collecting funeral programs- yes, I'm puzzled too. I got 75 printed.  Within one hour into the service, they were out.  But!  I received multiple compliments on the design, from those that know I did it. It wasn't about that, yet I have another notch of accomplishment.  A person doesn't understand or know what she or he can endure until it's done.  I didn't expect to have to do any of this, yet I endured like a solider (ppl that know me would say another branch, lol).  Either way, I did it.

Flortia, it was -still is an honor knowing you.